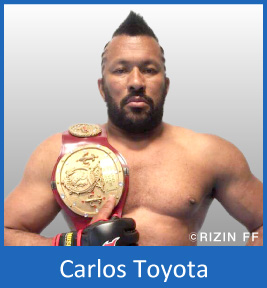 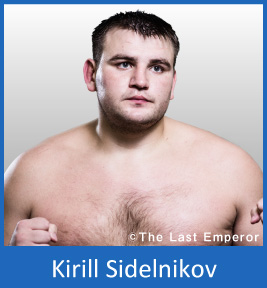 Special One Match
Kirill Sidelnikov def. Carlos Toyota
via TKO (strikes) – Round 1, 2:32
Kirill Sidelnikov def. Carlos Toyota via TKO (strikes)
– Round 1, 2:32
1R
Toyota, the southpaw, faces up with Sidelnikov who is an orthodox fighter.
The fighters start off slow, feeling each other out. Sidelnikov faints a little before going for a low kick. Both fighters evade and circle, with Sidelnikov on the front foot before they both trade a series of jabs and straights.
They circle again and Sidelnikov hits a nice right middle kick to Toyota’s ribs. More punches traded by both fighters, nothing but the odd one connecting.
Sidelnikov slides in with a nice left hook before following up with a right overhand hook that connects. He follows it up with a right middle kick and a series of punches that have Toyota reeling back to the corner. He clinches and throws a knee but Toyota pushes him back and creates some space for himself. They continue to circle and trade punches, nothing landing. Sidelnikov, out of nowhere, stops fighting and starts checking his nose. Carlos, being such a gentlemen, checks to see if he’s ok.The referee then checks, Sidelnikov is ok and they touch gloves and resume. They simultaneously throw straights, but Sidelnikov adds in a low kick that seemingly is too low. The referee stops the fight to check on Toyota, who is holding his groin area. Toyota quickly shakes it off and tells everyone he’s ok and the fight resumes. They touch gloves and Carlos throws a middle right but Sidelnikov leaps in and surprises him with a series of straights and hooks that Toyota has no answer for. He falls backwards and Sidelnikov keeps on attacking. The fight ends on a TKO referee stoppage.
An interview with Kirill Sidelnikov.
Now that the fight is over, how do you feel?

I feel great, on top of the world. I have trained really hard and we prepared well for this. I would have liked to be out there in the ring a little bit longer, but we achieved the desired result and in a short period of time.
Did Fedor give you any advice before you fought?

Fedor just being there for me was big. I also got a massive boost when I caught him out of the corner of my eye during the fight. The advice he gave me was to not rush, and to fight the fight at the pace I want to fight it at.
Can you give us your thoughts on what it was like to fight on this stage for RIZIN?

Firstly, I am so happy to have been able to have fought here in Japan. I grew up watching RIDE and to be able to fight in an organization with similar framework, is such a great honor. I really want to come back and fight here again.
It’s been a while since you had an MMA fight?

Combat Sambo is a Russian sport, and I have dedicated my life to it. The spirit of it runs through me but thiss time I went back to MMA and fought. I felt great and my preparation was really good. I am on top of the world and want to build on this and keep going. I’d love to be here again this time next year fighting for RIZIN.
An interview with Carlos Toyota.
Tell us your thoughts on how the fight went.

I wanted to keep attacking more than I did, but he got me good on the leg and it really affected things. I thought I would be able to fight the way I always do, but I couldn’t.
For such a good place to aim, as soon as it happened, did you feel the damage? There was no time to assess it.

I’m not sure if he was aiming for there, but I didn’t feel anything strange, I thought I was ok.
Being able to compete on such a stage must be like a dream come true. It’s unfortunate that you lost, how do you feel about this?

It really was a stage of dreams. I used to watch events like this on TV, so I was a little nervous. It was unbelievable, like being in a dream.
Could you put the loss down to not having enough time to train?