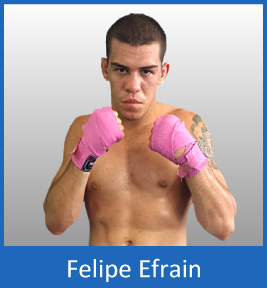 1R
Both fighters are orthodox fighters. Motoya starts with a couple of low kicks, and a left hook that is way off. A low kick that connects by Motoya is followed up by Efrain throwing a jumping left round house. The fighters exchange punches before another jumping kick from Efrain. They exchange a series of kicks and punches, with Motoya the aggressor. They clinch and Motoya start throwing knees to Efrain’s body.They clinch again and Efrain tries to hip throw Motoya but is not successful. Motoya has both arms firmly wrapped around Efrain’s waist and takes him down. He controls Efrain and mounts him close to the ropes.
Efrain, in the half guard, tries to escape but Motoya controls him well. Efrain is able to stand but Motoya takes him back down again straight away. Efrain gets to all fours and Motoya takes his back and goes for the sleeper submission. He is able to roll Efrain over onto his back and goes for the sleeper again. Efrain rolls back over to all fours with Motoya’s coach screaming “go for his arm”, which Motoya momentarily tries.Efrain shows some good strength, standing up from all fours with Motoya on his back.
With Efrain now standing straight up, Motoya has piggy backed him and is going for another sleeper. Efrain moves to the corner as Motoya starts striking, still on Efrain’s back. Motoya has been the aggressor in this fight and continues a flurry of punches to Efrain’s face, still riding his back. Efrain finally gets him off his back but Motoya takes him back down to the ground.
Efrain has barely had any offense and Motoya lands a knee to Efrain’s face. Efrain escapes to the ropes, clinging onto them for dear life! The referee doesn’t stop the fight and both fighters clinch and trade positions back in forth. Efrain finally lands something, a right hook and then a middle right kick to Motoya’s ribs but he slips in the process. He gets up straight away.
Efrain throws a right uppercut and THEN OUT OF NOWHERE hits Motoya with a massive left hook that sends Motoya reeling to the canvas. He stands over a fallen Motoya and throws a barrage of punches, and the referee has no choice but to stop the fight.
(fight to be ruled no-contest due to Efrain missing weight)
An interview with Felipe Efrain
Looking back, how do you think the fight went?
I am very happy.
Your opponent had you quite a few times tonight?
I knew what kind of fighter he was before we fought, but he really was a strong fighter. I wasn’t really able to dictate the pace of the fight.
How did you feel leading up to the fight?
For normal fights I usually get nervous but today I wasn’t. I felt calm, and I also felt the support of the crowd. At first I kind of just let the fight flow, but halfway through I thought I started to control the pace a little. I am so proud to be a representative of Chute Boxe.
Do you think this victory will lead to more Chute Boxe fans?
I think a lot of people were able to watch Chute Boxe tonight, so yes, I do think so. I have a lot of senior fighters, and I think that if we are able to have more Chute Boxe fights, we can really pick up a lot of fan support from the Japanese people.
You were over the contracted weight for this fight?
I am really sorry for worrying everyone about this. I needed to lose weight in half a day, and even though I tried to sweat it out in the bath, I just couldn’t make weight.
A comment from his team:
This is the first time he’s had this kind of problem. Also, after a long 27 hour flight, it’s also the first time he’s ever had jetlag. There was no sauna in the hotel so we tried to have him sweat it out in the bath. He had jetlag, and we also didn’t want him to get sick, so we didn’t place a whole lot of importance on losing the weight. If we are given another chance, I know he will be able to make weight in time and put on a really good fight.
Were you happy that Rudimar Fedrigo came to watch the fight?
I am very happy. Rudimar Fedrigo is like a father and inspires me so much. I would also lastly like to thank Mr. Sakakibara. Thank you for putting on such an amazing event. I feel like I also like to fight on the 31st.
An interview with Yuki Motoya.
Now that the fight is over, how do you think it went?
My punches were sloppy.
Do you remember anything about the KO?
I’m not sure if the punch connected flush or anything, but I remember everything before that.
Your opponent didn’t come in at the contracted weight. What are your feelings on this?
I don’t think about that. Rather than him winning, I think it was me who lost the fight.
Taking into account that the first round was 10 minutes, did that give you time to solve the back mount that he’d been doing throughout the fight?
Yeah, his legs got further away and my legs were pretty tired too, but I just thought of a way to change it up.
The fight was ruled a no contest from the beginning, but in actual fact you got knocked out. How are you reacting to this?
I got knocked out at such an important time in my career, so I need to think long and hard about where to go from here. Of all the times when I couldn’t lose, I lost.
admin2016-01-02T03:47:43+00:00