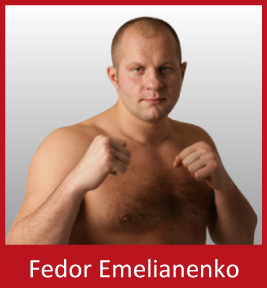 Before the fight started, for his contribution and services in the promotion of both Japanese and Russia cultural exchange and sports through MMA, Fedor was presented with a championship belt by the Minister of Education, Culture, Sports, Science and Technology, Hiroshi Hase.
1R
Jaideep, with the long reach, leads with a couple of left jabs and a left low kick to start. Fedor throws a left jab of his own and steps into the clinch. The two fighters are on the ropes and Jaideep desperately tries to stop Fedor from taking him down, his body in between the second and top ropes at one point. Fedor gets in double underhooks lands a couple and Singh circles out
Fedor comes at him with a series of hard punches that excite the crowd and then grabs a rear waist lock. He takes Singh down and moves to side control. Singh nearly gives up his back as Fedor works the ground-and-pound. Fedor attempts a sleeper but Singh defends.
Furious punches by Fedor, who is now in a full mount. Singh holds on, defending as tightly as he can. Fedor makes some space and keeps hitting him with right hands until Singh submits to strikes.
Fedor in-ring comment after the match:
“To all friends, good evening. I am so happy to be able to fight in front of you all and to see you all again. Because of all the fans support, I am able to stand here tonight. On the 29th, my junior fighters, my friends, fought here in front of all of you. From the bottom of my heart I pray that you support them. To the people of Russia, I would like to say Merry Christmas and a happy new year and pray for your happiness. For Russia and for God”.
An Interview with Fedor Emelianenko
It’s been a while since you fought. Tell us your thoughts on how the fight went?
I am happy that I won. Singh was a good opponent, and his kicks are very strong. The quality of his fight game is very high. The preparation for this fight was the best it’s been for me, and I was able to everything I am capable of. Again, I am very happy that I won.
Were you thinking about any tactics for the takedown?
As for as tactics go, I wasn’t thinking about a “takedown”. You have to judge what’s going on at the time. Do I need to create space? Should I go for a takedown now? These kind of things. I saw what was open and did it. Singh is a really good grappler, and I think he worked on his ground game hard for this fight. He defended very well I thought.
Have you both mentally and physically returned to fight mode?
I definitely have, but I don’t know what everyone else thinks.
You fought a calm fight as usual tonight.
If we are going to talk about how I feel mentally, I was more concerned with how my younger fighters went tonight, rather than my own match. Our team is a very close knit unit and we all fought well tonight. I have lots of support from them.
Your group did excellent tonight.
The younger guys came out of our training camp much improved and everybody was there to help each other.
Would you like to fight King Mo or Tsuyoshi Kosaka at some point in the future?
I’d like to talk to Mr. Sakakibara about my future before I decide anything. The most important thing for me is whether or not I can deliver a fight to the Japanese fans that they will be interested in. I don’t know if I’ll fight King Mo or Tsuyoshi Kosaka, right now I am just thinking about going home and taking a rest. I’ve been in a brutal training camp for 6 months and haven’t spent much time with my family.
An Interview With Singh HEART Jaideep
What was your strategy for this fight?
To use my best weapons in the fight.
How do you feel now?
Honestly, I feel like I wasn’t able to do anything. I’ve taken a step backwards.
Can you give us your thoughts on your opponent, Fedor?
I had no idea what he was going to do. He’s the kind of fighter who doesn’t let you get in any attacks. Also, he’s a lot faster than I imagined, it surprised me quite a lot. I thought I was being suffocated. I thought I showed everyone what I can do offensively but I still lost.
Were you able to make the most of special training from Okinawa in this fight?
Not really no. I wanted to go full ground, and wasn’t able to so I am regretting that.
What part of Fedor’s fight game is fast?
When he comes in to get you. Also, if he thinks he can’t get you with one thing, he moves onto something else so quickly.
He rushed at you with a bunch of hooks. What happened there?
His hooks were extending out and he backed me into the ropes which is where the problem was at. If was able to escape or change how that went, I think the flow of the fight might have changed.
What was it like being in the semi-main event of RIZIN?
It brought back memories of my childhood when I used to watch MMA. Something’s have changed, but something’s have stayed the same. I am quite downbeat that I wasn’t able to take advantage of this chance of fighting Fedor, and if I have a chance to fight him again, I’ll win.
admin2016-01-05T16:54:44+00:00