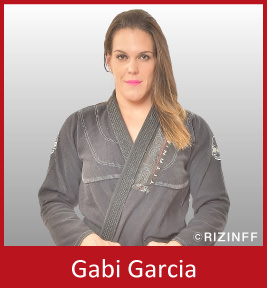 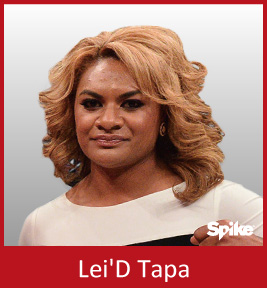 1R
Lei’D faces up to Gabi (orthodox) in a southpaw stance and throws a few left hands to start. She manages to connect with a solid left and drops Garcia. As Lei’D approaches the fallen Gabi, Gabi lashes out with legs and then makes it to her feet. She stumbles a bit before recovering. Lei’D connects with another solid hard left on Garcia as they try to clinch.
Garcia wades into the clinch, lands some swatting punches. Some good shots by Garcia on the ropes, but then catches Lei’D hard with a backfist and quickly pounds her out from half guard as the referee stops the fight. Garcia is victorious on her MMA debut.
An Interview with Gabi Garcia
Looking back, how do you think the fight went?
I’ve never felt such a sensation before. It was my debut and to fight in front of such a big crowd really got the adrenalin pumping. She caught me early on with a good punch but that woke me up and I was able to beat her.
It wasn’t your newaza that stood out, but rather your stand up game. What tactics did you have for this fight?
I really wanted to go to the ground, but she stood firm and I wasn’t able to. That’s the truth. I am so happy that I knocked her out though.
What are your thoughts on your opponent, Lei’D Tapa?
I felt she was very strong. I took quite a bit of damage from her strikes. I respected her throughout the fight. Even though I had the disadvantage at the beginning, my teacher always told me that “in jujitsu, even if you are in a bad position, you be patient and don’t give up. That’s the key to victory”. I had that spirit with me right until the end and that’s why I was able to win. I’m happy that I was able to win with a punch too.
What are your thoughts on how your first MMA fight went? And what was the theme of the fight for you?
I have lots of room for improvement in every area. I was able to get my feelings and emotions under control when I got in the ring. As Mike Tyson says, you may have a plan for the fight but that can all go out the window on the first punch. My coached Rafael worked with me on punching distance but everything was different come fight time. I’m happy that I didn’t get injured and that I can go back to America for some more intense training. The theme of the fight for me was attacking, and the techniques needed for taking her down to the ground.
Lots of fans were calling your name during the open ceremony.
It was a dream come true for me. Stars from yesteryear, like Wanderlei Silva, Maurício Rua, Minotauro (Antônio Rodrigo Nogueira) came to mind and I thought to myself “this is my time”. She caught me early on with a good punch but that woke me up and I immediately said to myself, “she is not going to escape with this victory”. I think that is the spirit of the samurai. I hope I put on a good show for the Japanese fans, that would make me very happy.
What things did Rafael Lovato Jr. focus on with you in training?
When I first decided to switch over to MMA, I was told to “go and see Rafael in California”. It was very hard training, like being thrown straight into the lion’s den. I became a female lion and was able to train with some of the biggest stars. I learnt so much from them. On one occasion, one of them punched me in the nose and it started bleeding but Rafael said “you don’t need any tissues”. I continued on training without fixing my nose. It’s these mentally challenging things that make you stronger. To Rafael, I want to say that I am sorry that I was late to practice so many times (laughs). Team Rafael is a big family.
You were able to knock her down with a swinging back fist. Who taught you that? What was their response?
They are very happy that I won. I was beaten quite a lot in training and wasn’t able to retaliate but today I thought I retaliated very well (laughs). The fight didn’t go as planned, but I did learn one thing. If you have the will-power, good things will happen to you. I also have the feeling of “I only got to train this” (wants to practice everything). Even when her punches landed, I thought I was able to counter well.
How did you feel when the ring announcer called out your name as the winner? And what did your coach say to you?
I was very happy. My coach congratulated me.
And what are your objectives from here on out?
I would like to continue with MMA. I have another fight in roughly 7 months, but it’s all up to my manager. To be honest, I want to go back to Brazil but I have to go back to the US and keep training. I am not going to just wait for something to happen next, but I want to be fully prepared for anything as I wait for my next opportunity.
admin2016-01-05T16:31:54+00:00