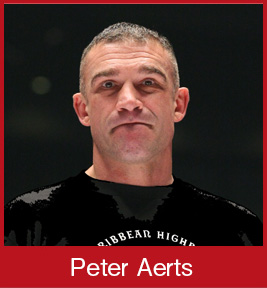 1R
Aerts, taking this fight on just days notice, looks sharp as the bell sounds. He throws a flurry of punches but Baruto walks right through them, avoiding and taking him down into half guard in the corner. Baruto throwing wild right hands while Aerts, halfway through the ropes, grabs onto them. They restart closer to the center and Baruto takes side control. Baruto looking for north-south, trying the choke but doesn’t get it. He keeps going for the north-south choke until the bell sounds.
2R
Baruto wades into the clinch and hits an inside trip, only for Aerts to wind up on top in mount. Baruto gives up his back and Aerts goes for the rear naked choke but fails to put in his hooks and gets reversed into guard. Aerts looks for an armbar and Baruto uses that to pass. Aerts slips out and they’re both in the other’s front headlock. Baruto gets up and a rope break restarts them in the center. Right hand by Aerts, Baruto messes up a head-and-arm throw but still ends up on top. He tries to hammerfist Aerts until the bell sounds.
3R
Aerts catches him with a right hand coming in but can’t stop the bear hug from Baruto, who hits an inside trip against the turnbuckle and they move them towards the center. Baruto goes from full guard to half guard and keeps smashing Aerts in the body. The referee stops them and stands them up but Aerts gets tied up and taken down with an outside trip right away. The 3rd round ends in a guard. There judges give the match to Baruto 3-0, winner by unanimous decision.
Baruto in ring comment:
“Hello! Peter, thank you for taking the fight tonight. I am aiming to be the best in the world. I wish everyone a happy new year and pray next year will be great for all. Thank you.”
Aerts in ring comment:
“I had very little time to train but I gave it my all in the ring tonight. Domo Arigato Gozai-masu”.
An interview with Baruto
Looking back on the fight, how do you think it went?
I didn’t think it would go three rounds. I wanted to beat him in the first round. Even though I won the fight, I didn’t win the way I wanted to. It’s my first fight though, so I’m not too worried.
Your opponent was changed at the last minute. What are your thoughts on this?
I trained to fight LeBanner, but was able to adapt quickly when the change was announced.
Peter Aerts is a legendary K1 fighter. What was it like fighting him?
It’s my first fight so I have nothing to say. Good job Peter. Good job me (LOL).
And what are your plans moving forward?
I want to fight again next year. The years ends today, but in a few days I’ll be ready to train hard again. Also, tomorrow I’ll be joining the Kitano office and wanted to announce that. I’ll be trying my hand as a on air talent.
What was it like to be back in fight mode?
The fans reception was really quite amazing and it almost brought a tear to my eye. It’s been two years since I moved away from the sumo world and I’ve missed that feeling of nervousness before a fight. It felt great to feel it again as we end the year.
An Interview with Peter Aerts
Being such a sudden, last minute replacement, what was your mental state going in to the fight?
I was Singh’s sparring partner and did train, but on Christmas eve I got very drunk and was walking around Roppongi at dawn. When I was approached to fight Baruto, I was a little hesitant because he is my friend. However, this was about helping out the sport of MMA so I accepted.
What are your thoughts on your opponent Baruto?
I got knocked down once and hit my head on the ropes and was hesitant about what to do. I thought about going for an armbar but I didn’t. I haven’t done full on training for about 4-5 years now, so I fought as well as I could. When Baruto was on top of me, he weighs 170kgs and is too heavy.
For a fight on such short notice, I thought it was a great fight.
When he was on top of me, I thought I was going to pass out at one stage. I definitely wasn’t going to tap and held out as long as I could. I was able to momentarily reverse and get on top of him, I tried my best but was tired and couldn’t go forward from there.
We are looking forward to your next fight.
I’ve been retired for two years now. I fought tonight to help out Mr. Sakakibara and Rizin. That’s the only reason why I fought. I’m too old now, so don’t expect me to fight again. My wife came here with me expecting us to be on vacation. After the fight she said to me “you are crazy” LOL.
admin2016-01-05T16:39:02+00:00