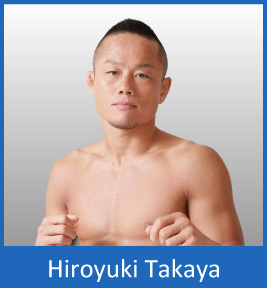 Special One Match
Hiroyuki Takaya def. DJ Taiki
via unanimous decision.
1R
Taiki comes flying out with a jumping front kick that misses wildly, and Takaya leads with a right hand and the two exchange a series of punches for the first minute. This is a feeling out contest at the moment. Takaya lands with a nice left jab but Taiki slows the action with a clinch. Taiki has Takaya against the ropes and he’s holding him there but eventually, the referee breaks it up.
Taiki keeps spinning around on the spot, as if to fake a spinning back fist, but doesn’t actually throw anything. He does this quite a few times. Takaya is now getting the better of the standup, throwing a front kick and some punches but Taiki finally lands a clean left cross, having momentarily switch to a southpaw stance. After some more punch and kick exchanges, Taiki lands another left and then attempts a spinning backfist but misses. He again twirls around on the spot.
Although partially checked Takaya hits outside leg kick. Takaya gets in a couple of good punches, but Taiki clinches up. Takaya takes him down. Taiki is on all fours and in the ropes, trying to fend off Takaya and Takaya lands some punches to his head. Taiki manages to stand and turns into Takaya. Taiki clinches into the ropes until they get a referee break. Takaya throws some kick and punch combos and lands quite a few.
2R
Taiki slips on a kick and Takaya comes forward. Taiki manages to get up before Takaya can get there, but gets pushed back to the ropes in a clinch as the referee breaks it up. There is an overhand from Takaya before the two trade kicks. Taiki has picked up his game a little and is moving well, landing the odd left. Takaya manages to land a right to the nose of Taiki that stuns him, before following up with some more punches and then taking him down. Takaya goes into a half guard and hits some knees to the side of Taiki’s head. Taiki manages to scramble and get up.
3R
Taiki coming out aggressive, firing a high kick. They exchange punches, Taiki is switching from southpaw to orthodox. Takaya hits a powerful left that staggers Taiki. Takaya is looking to finish, but Taiki swings back and clinches up until the referee breaks it up. Taiki, looking very tired, is now swinging wildly as Takaya is on the front foot, looking for that killer blow.
Takaya lands a jab and then a blast double, then takes Taiki down and goes into a half guard. Takaya is looking for an arm submission but can’t get one. Taiki stays in a full butterfly guard as Takaya tries a front choke and then lays in the knees. Taiki finally gets up at the bell and the match goes to the judges’ scorecards. Hiroyuki Takaya def. DJ Taiki via unanimous decision.
After the match, Takaya grabbed the microphone.
“I couldn’t really fight the fight I wanted to, and it wasn’t a very good fight but next time I will score a knock. I am looking forward to your support again. Thank you”.
Interview With Takaya
Looking back on the fight, what are you feelings towards it?
He is such a serious fighter, it was hard to knock him out.
Did any of his offense affect you?
He got one really good punch in but I was fine. It didn`t matter how much I hit him, he didn`t wither. He`s got a very strong chin.
It’s been a while since you last fought at an end of year event. What are your thoughts on this?
It was such a great crowd that it really got me fired up. It was a great event.
admin2016-01-02T23:12:03+00:00