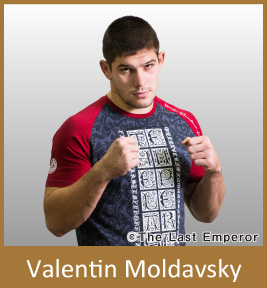 Tournament Reserve Match
Valentin Moldavsky def Yuta Uchida
via submission (rear-naked choke) – Round 1, 2:20
1R
Both fighters open the fight with right crosses but Moldavsky is right in there, forcing Uchida back to the ropes. Moldavsky controls Uchida’s back and tries to spin him around and take him down, but Uchida stands his ground initially. Moldavsky picks him up in the air and dumps Uchida on the canvas. Moldavsky maintains his position the whole time, taking Uchida’s back but Uchida finally escapes. Moldavsky finds his rang, and picks Uchida up over his head again, taking him down. Instead of mounting, Moldavsky goes straight for Uchida’s head with punches.
As Uchida stands up from the mount, Moldavsky jumps on his back and drives him back down to the canvas and into the blue corner. He mounts Uchida and starts throwing a barrage of punches which Uchida has no answer to. As Uchida tries to escape, Moldavsky takes his back again and drives Uchida’s head to the mat, applying a perfect rear-naked choke to tap Uchida out.
An interview with Valentin Monldavsky
Looking back, how do you think the fight went?
I am just so happy that I won.
Did you watch of your opponents previous fights beforehand? His traditional Karate movements etc.
I tried to find some of his stuff online but I couldn’t so I didn’t have a chance to study him before the fight. In saying that, I heard he was a famous karate champion so I already had some kind of game plan focusing on closing the distance, moving my arms and legs well, and just being quicker.
What do you think has been the stand out point about your team so far?
As you have all seen. Each member of our team was victorious tonight. On top of that, we all made short work of our opponents. It’s no coincidence, we’ve all worked hard to get the results tonight and we feel satisfied.
An interview with Yuta Uchida.
Looking back on the fight, what are you feelings towards it?
He was much stronger than I thought, and I wasn’t able to fight as well as I thought I would, but it was still a really good experience for me.
It looked like you were trying to see the space between you guys a lot. What were your plans going into this fight?
I was trying to develop a plan of not being hit by him, but he kept coming at me, keeping up the pressure. I thought he would come at me with a few faints and then attack, but he came in big and fast and this is what I am reflecting on at the moment.
You watched the opening match with Kohsaka in it. Were you impressed with anything?
I was so impressed, I felt like crying but I was ready to fight. My match was after his and his performance really pumped us.At that age, and against a go so big as he was, to be able to fight like that, I really respect him. I am planning on going to Kohsaka and start training with him,
Do you want to keep building up on your MMA career from now on in?
Of course I’d like to keep fighting, I definitely feel that way. I didn’t like the way that I lost this fight so I am to go home and fix all those points that need to be fixed. If am able to get another chance like this again, I will do whatever it takes to win the important people over who matter.
admin2016-01-02T23:26:46+00:00