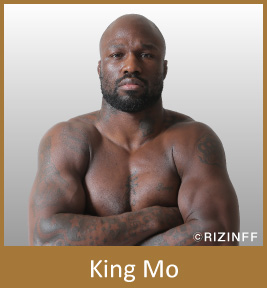 1R
Mo wearing wrestling shoes again and they trade jabs. A solid 1-2 by Aukstuolis. Aukstuolis tries to advance and Mo changes levels, chaining his way to a rear waistlock. Aukstuolis re-peatedly grabs the ropes to defend and successfully does so, circling off. A sharp hook from Aukstuolis.
Hard counter right by Mo met by a left hook. Double jab from Mo. It’s been mostly punches so far, with Mo on top.
Jabbing the body, then back upstairs, landing with a 1-1-2. Aukstuolis falls short with a left hook, lands a counter jab. Mo waves him on. Another stiff jab from Mo, who weaves away from a counter combination. Lead right connects for King Mo, then a good body shot. Mo continues to taunt him.
Mo nearly ducks into an uppercut, continues bossing the fight with his jab. He shoots in, can’t take Aukstuolis down. Lead hook connects amidst the jabs. Aukstuolis lands a hook around the guard but a hard right cross by Mo. Mo goes for the body. 1-2-3 by Aukstuolis but nothing hits. The round ends an King Mo is on top.
2R
Aukstuolis lands a body shot early but still has no answer for King Mo’s jab. 1-2 connects for the Lithuanian, who’s now putting together decent shots. Mo shoots in and slams him to the mat, but can’t keep him there so goes back to his jabs. Mo goes for a single-leg and sweeps Aukstuolis to the mat. Full guard now and Mo is landing some solid ground-and-pound. Aukstuolis just trying to control his wrists. Mo alternating between hitting with short punches and diving into guard with bigger strikes. Very hard punches by Mo, who passes to half guard. Aukstuolis scrambles up, Mo dumps him right back down and takes side control. The match ends and the judges score it 5-0 to King Mo, who advances to the GP Final.
An interview with Teodoras Aukstuolis
Now that the fight is over, how do you think it went?
I feel great. It was a great fight. I am so happy to have fought at such an amazing event.
How do you feel the fight against Bruno Cappelozza went?
It went accordingly to plan. When you fight you have to feel how the fight is going, when to punch and when not to punch etc, and plan how you are going to fight.
What are your thoughts on King Mo?
It was a really great fight. I wasn’t able to give it my very best, but I know in my heart that I can definitely do better. Mo is such a good, strong fighter and even though I knew he was going to come in with a takedown, just as you all saw, he was able to. So that’s why I think it was a really good fight. I want to come back and fight in front of the Japanese fans again.
What are your thoughts on the Japanese fans?
Amazing fans. It’s like a dream come true for me to be here and I am so happy. I didn’t break my nose this time, so everything was really good.
admin2016-01-05T16:08:32+00:00