Interview with TK’s protégé Yuta. “Fighting to win is important, but I want to fight to finish”

Interview with TK’s protégé Yuta. “Fighting to win is important, but I want to fight to finish”

Yuta will be facing Bellator representative Hisaki Kato on April 17 at the Niho Gaishi Hall in Nagoya for the “Top presents RIZIN .1” event. He talks about how he became a champion from a golfer.
“I had blood in my urine, but it was fun”
—You went to high school on a gold scholarship. How did you get into golf? I heard that you could become professional.
No no no… I wasn’t that good. It was my father’s influence, and I started in 7th grade.
—You joined the wrestling team in your senior year in high school, what such timing?
I liked golf, but I liked combat sports more. I’ve wanted to compete in combat sports and after my season was done in golf, I started going to wrestling practice. I’ve always thought that I needed to work on my wrestling if I were to fight.
—How did you first days of rolling go?
I don’t recall on them doing anything to me, but I just couldn’t keep up. I was just working regular drills such as shooting in and getting back up, over and over. But it was really tough, to a point where I had blood in my urine, the very next day after my first practice. But it was really fun, and I enjoyed it very much.
—What was the reason why you wanted to fight?
It started more from pro wrestling. I loved pro wrestling and I’ve been following it since I was a little kid. I also watched PRIDE, K-1, anything that was on TV, I watched. And came to the conclusion that I wanted to compete as well.
—Obviously glf and MMA are 2 totally different sports. But do you see any similarities?
I’m not sure. They are totally different sports, and the way you fatigue is totally different. I have to say that golf is a very sensitive sport. I mean, you have to hit a ball for a long distance and you have to make sure it flies straight, and put it into a tiny cup. But how to execute your muscles for impact, may be similar, so the learning process of striking and takedowns weren’t that difficult.
—You joined Tsuyoshi Kosaka’s gym right after graduating high school. Did you have you eyes on becoming a professional fighter already?
Yes, that is the main reason why I joined his gym.
—You fought for ZST, and DEEP, eventually winning the DEEP title. It looks like you are climbing that ladder to success.
I thought it would be easier, or sooner for me. But there were some obsticles in the way, and time when things just wouldn’t work out. When I lost my fight to determine the challenger for the title fight, I got desperate, comparing my age to other promotion’s champions and all. Defeat is never a good thing.
“Technique and physical strength is for sure a factor, but Kosaka san taught me that mental strength is the most important aspect”
—Your fight in RIZIN has been confirmed. What are your thoughts?
– Winning is important, but I felt that fighting on platforms like this is really hard to do. It took me a long time to get myself confirmed. I’ve been wanting to fight in this ring, and as a fighter, everybody dreams of this opportunity, but actually being confirmed……. I’m really excited.
—On last year’s NYE, your coach and mentor Tsuyoshi Kosaka fought and you were in his corner. What was going through your head at the time?
Kosaka san was training the entire time regardless of a scheduled fight or not, but once the fight was confirmed, I was lucky enough to take part of his training camp the entire way. I saw him getting ready daily. And being inspired by his mentality, at the same time I felt ashamed of myself. The day of the fight, that moment when he set his mind to fight in the ring, I realized that it wasn’t about the preparation, diet, practice. It’s about being able to get into that mental stage in order to fight. Kosaka san really taught me that just by being who he is.
—How was the event’s atmosphere?
I may be speaking out of my league, but I really wanted the event to be successful, so I was concerned about the outcome. But it turned out that everything blew away my concerns, production, fighter quality and all. Something that I never anticipated.
—What are your impressions on your opponent?
He’s tall. That’s about it. He looked tough. I’ll study him later.
—What kind of fight do you want to show?
I want to finish. I’m sure that the PRIDE fans will be watching RIZIN, so I want to remind them on how exciting MMA really is. Fighting to win is important, but I want to fight to finish.
—Message to the fans
I want to put on a performance where it will remind people of PRIDE, and exceed it. I will put in everything I have, so everybody please fight with me. 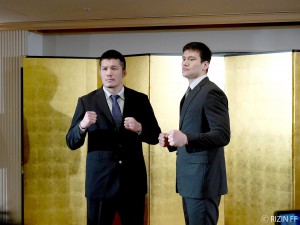